April 09, 2018
I am taking a break from blogging about the amazing adventures we go on to different countries to give you a taste of Olomouc and the day-to-day adventures we get to experience. Olomouc is a city of about 100,000 people. I’m not sure what Olomouc translates to or what word it comes from, but whatever it is, it should be “Home of fountains, churches, and adorable cafes” because there is one of them at every corner.  I am constantly finding “my new favorite spot.”   Today’s favorite spot was a park a stumbled upon just off of Lower Square.  It felt like I walked into a painting.  The birds were chirping, sun was shining, and children were laughing.  Locals were walking their dogs and babies on the path and I found a bench overlooking a small stream. A Monday morning back home I would be heading to a marketing class.  I wanted to soak up every minute I could on that bench!

This morning I also decided to stop into a small souvenir shop that looked cute.  The walls were lined with hand-painted dishes and kettles.  I found a little ornament that I fell in love with and a few more postcards (I have a bad habit of buying way too many). The cashier asked if I wanted stamps for the cards and I declined her offer with “Neh.” (The post office had also become a new favorite place).  She then said my total was 115 CZK.  I handed her a 200 CZK bill.  She asked if I happened to have 15 CZK in coins to make change easier. I did and she was appreciative.  WAIT. The cashier only spoke Czech... AND I UNDERSTOOD HER!!! I am catching on! That was my first full Czech conversation without Tereza or google translator’s help! I am too excited about it, but you have to take any win you can get here.

Another day-to-day activity includes going to the post office (Posta).  I know exactly what you are thinking: “Paige how hard can that possibly be?” Alright friends, if you haven’t learned yet that everything is hard here the first time you need to put glasses on and pay attention more!  Jenny and I were standing at one of two machines with 12 buttons and labels next to each one.  We needed to press a button for a number in line. Google translate came to the rescue. Kind of.  The buttons weren’t translating quite right to us.  We had to have been standing there for 5 minutes with our fingers hovering over random buttons while people were passing us on the other machine.  On the sixth minute a woman approached to us and said “Do you need some help?” (Picture a stunned Jenny and Paige. She had been listening to us struggle this whole time. Awesome.) I would have been laughing at us too.  I was just grateful to hear some English.  She instructed us to simply press the first button to buy stamps.  We had a number, but still no stamps.  Que google translator. “Razitka” is what came up when I typed in stamps.  That was no help to me or the post office worker. Okay. It was time to break out my best charades skills.  (Picture me smiling and pointing to the blank corner of the postcard). It must have worked because two weeks later Roger and Rita texted me saying they loved the card I sent! 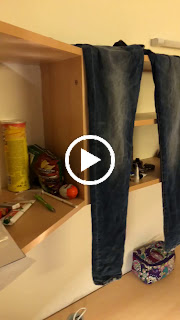 A glamorous week- to- week experience is laundry.  Again, I promise it is harder than it sounds! Our flat mate, Taylor, said she uses the laundry in our building.  However the down side she said was you have to go to the front desk down the block to get the key to the basement door and the key to activate the machine itself. Faviola and I thought that sounded easy enough.  After retrieving the keys we ventured down the stairs to the basement door. I know I can be a tad dramatic at times but this was classic creepy basement material. Creaky door. Flickering lights. Cement walls. The whole nine yards.  Despite the dungeon look, we were optimistic! Down the hall was a small room with two tiny machines in the center of the room.  One was open and Faviola was up first to test it out.  After loading her clothes, we closed the door. Small problem. The handle was broken off of the door. That seemed to be a bridge we would have to cross later.  We went back to our room to wait for the timer to run out. Bless the other student who was down there at the time to show us the trick to opening the broken door. We were doing great! Until (oh come on you knew there had to be a catch! Everything is hard the first time, remember?) we tried to load her clothes in the dryer. When I said earlier that there were two tiny machines in the room, did you assume that one was a washer and one was a dryer like we did?  Well we were all wrong.  One is a washer and the other is a washer and dryer combo.  I’ll give you guess as to which machine we had a key for.  With an armful of wet clothing, we found a room with four wires strung from wall to wall.  Air-drying room. Nice. (Did I forget to mention we were heading to Budapest in an hour?) We seriously considered investing in a blow dryer just to dry our clothes a little faster.  Long story short, we got our clothes cleaned just not so much dry. (Faviola and I carried wet towels onto that overnight bus you have read about).  Note: use the laundry mat that is just down the street. They have working washers and dryers.  Who knew moving to a new country would make even the simple tasks a great experience?

Despite what my friends at home think, another daily task is going to class.  (I will go more into detail about what we learn in a later post). Our building is a few tram stops down the road from the dorms and very close to Upper Square. We usually have class from 15:00-18:15 (3:00pm- 6:15pm. Military time. Another simple task made hard) and a movie once a week that relates to something we have discussed in class.  The Czech students join us for the movies and it is fun to see what they think of the movies. Last week’s movie was a parody of American western and I think a lot of the humor was lost on us because the Czech students were busting a gut while we were looking around confused.

So far I have fallen in love with Olomouc and I feel like the luckiest girl in the world to be able to call it my temporary home.  I am excited to return to America, but I know I will long for the park, my other favorite places, and Olomouc when I get back.

Popular posts from this blog

Momma We Made It. A Story of Travel.

March 21, 2018
Dobry den! Greetings from the Czech Republic! My name is Paige Kristensen and I am a sophomore at UNK studying Business Administration and Sports Management.  It seems like I have been waiting since I opened my acceptance letter to start sharing about what studying abroad is like.  I talk fast so I hope you can keep up! Tomorrow marks two weeks since hopping on a plane and flying across the Atlantic.  Traveling to Olomouc went smoothly (For me, anyway. A few of my friends can't say the same).  There were six of us brave enough to travel together, and let me tell you nothing forges a friendship faster than being lost in a German airport at 4:00 am.  We arrived in Prague a few days early just in case anything happened with flight cancellations.  Lucky for us- we didn't have to deal with that.  My first conversation with a local was our taxi driver from the airport.  It was something along the lines of "We are here to study abroad" and his response being "Your A
2 comments
Read more

Young and Broke. A Story of Berlin, Germany.

May 09, 2018
Free weekends are so fun because we get to go anywhere we want (as long as we are back by class time on Monday).  This free weekend we decided to head to Berlin, Germany. Kelsey, Annie, Jenny, Zach, Faviola, and I all boarded the four-hour train together, but we wouldn't stay together for long. The train was already very full.  One fun thing about the train company we booked is they oversell their trains.  We all scattered to try to find seats.  I think we walked the entire length of the train. Twice. Jenny and I gave up and sat on the stairs at the end of one of the cars for about an hour.  By that time, enough people had reached their destinations and exited the train.  Zach came to get us and we were reunited in a compartment together.  Once we reached our stop, Kelsey was the expert navigator and told us we only needed to go three metro stops to get to our hostel.  We had purchased metro tickets numerous times before, but we must have looked like we were struggling beca
Post a Comment
Read more

May 14, 2018
To be honest, I wasn't sure what to expect from Poland.  We have only really been learning about the negative events that have occurred there. I was excited to form my own opinion. Our class loaded the bus and drove about two hours to the Wieliczka Salt Mine just outside of Krakow.  We descended the 54 flights of stairs to one of three levels we would eventually explore.  Our tour was around two hours and we still only saw 1% of the mine.  The mine opened in the 13th century making it one of the oldest salt mines in operation.  I didn't know that the term "salary" came from being paid in salt at that time.  Our guide encouraged us to lick the walls to taste the salt.  We was unsure at first, but before we knew it we were all sampling the walls at different times during the tour.  We also had the chance to sample concentrated brine which tasted like very salty water. The different chambers in the mine were beautiful.  Some had live animations demonstrating how the
Post a Comment
Read more